We woke up at 5 am to catch the sunrise at what is often called a wonder of the world, the Angkor Wat. Unfortunately, it was cloudy and the sun didn’t show up until around 8 am. The reason that sunrise at Angkor Wat is so hyped is that unlike most monuments, the Angkor Wat is built facing the west, so the sun rises from behind it. The reflection of the Angkor Wat falls on a lake in front of it. The Angkor Wat is not a stand alone temple and is part of the Angkor Thom, a large complex of temples. Many people spend up to 3 full days there. The sad side to that is that Angkor Thom is now private property and charges $20 per day. The complex is so large that you need to either bike or take a tuk tuk to get from one temple to another. There a small route and a larger route depending on how many temples you want to see. Florence and I took the smaller route.

The temples at Angkor Wat went far beyond the temples I have ever known. They are more like historical ruins, with a few statues of Buddha here and there (though it was originally built for Hindu use). The colour of the walls is beautiful, mainly dark grey with tinges of green moss and the occasional red sandstone colour. There is no functional use of the temples we saw in the religious context. Its mostly a tourist spot where people walk around. Unlike other temples I’ve seen, the temples at Angkor Wat involve a lot of exploring and getting lost, much like you would in an ancient palace. The Angkor Thom is multi storey and very big in itself. After many stairs and galleried floors, you reach the core central area where there are three stone structures resembling stupas/mountains on top. This place is filled with rocks and tourists sitting on them. 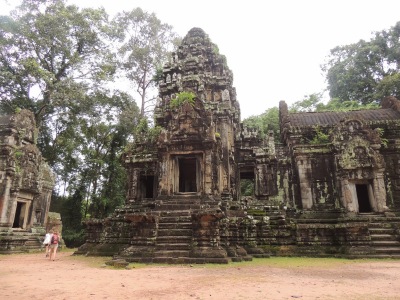 We spent over an hour exploring the Angkor Wat before we moved to the next temples. Most of them were similar in that they all had similar structures and materials with which they were constructed. They varied in size and complexity. Some temples were quite small and didn’t play as much with my sense of direction. There was an element of mystery in many of the temples. Some of them had unknown faces carved, like the Bayon, which was personally my favourite temple. Others were still incomplete for unknown reasons, likely to be the death of the creator. There was reconstruction work going on at every other temple we went to. Other countries’ governments were helping in conservation efforts such as the Indian and Chinese government.

Some of the temples in construction were a blend of old and new, not in a nice way. One of temples for example, had white concrete, red sandstone, grey rock and green moss all together, which definitely reduced the beauty and authenticity of it.

We conversed with our tuk tuk driver for a while. Turns out that he only recently started earning through a tuk tuk, as he was a chef earlier. He worked at an Italian restaurant, but apparently that paid less than driving a tuk tuk and had more work. His salary as a cook was $100 a month.

By noon, we were both exhausted and ready to go home. We had spent 7 hours walking around temples and the sun was getting to us. After spending a few hours napping, I went to the night market for dinner.

I got a $3 back massage after dinner. I almost got a khmer massage but I was told that its similar to a Thai massage in which they beat you to pulp. Later I discovered that it isn’t as brutal as the Thai massage and is more about pressure points on your body.