It was mostly a chill week with a good balance of work and other stuff. I actually got to do some pretty fun stuff this week!

First off, my friends and I went for something called Blackout, which was a dining experience in a pitch dark room. The idea was to simulate the kind of experience the visually impaired would have while doing simple things like eating a meal. We were led inside the restaurant by a waiter who was blind. She told us where to walk so that we didn’t bump into other tables. We sat down and she told us where our forks and napkins were. She told us where the jug of water was and insisted on us pouring water for ourselves for the sake of the experience. The whole thing was really interesting. For one, we had to feel all the cutlery, the plates, the glasses before we could use them. Secondly, we found ourselves focussing much more on each others’ voices than we usually do. So we were better listeners in general. For the first few minutes, our eyes kept trying to adjust to the darkness, since that’s what we’re used to when we enter a dark room. But it never happened! The room was pitch dark throughout. The food itself was pretty good. They had the option of ordering a surprise main or a surprise dessert. So you wouldn’t know what you’d be ordering and could only use the sense of taste to guess what it was when you got it. I ordered a surprise dessert-it was good, but I still don’t know what exactly it was!

The other exciting thing I did this week is that I got a tattoo! I’d been thinking of getting a tattoo for a while, and now just felt like a good time to do it. So I got the word ‘maya’ tattooed near my ankle in hebrew. Maya means dream in Sanskrit, truth or reason in Japanese, generosity in Persian, princess or honourable matriarch in Arabic and love in Nepali. I like that it has so many meanings-a lot of which I relate to (especially the Sanskrit and Japanese meaning). 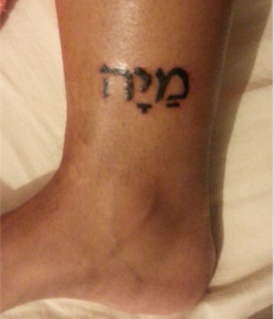 I also made good progress on the startup project I’ve been working on-got to speak with interesting people in the edtech space who gave me some great advice on things I could do to create a better product! But I don’t want to talk too much about that publicly, so will leave it at that!

Last weekend, I felt the urge to read fiction so I spent Friday afternoon at a cafe reading Metamorphosis by Kafka. It was really fun to read and it was a really quick read (took 2 hours to finish the whole thing)! I downloaded a few more books on my Kindle to read this week/weekend. Do you have any favourite books that you’d recommend? I’ve been asking friends for suggestions so if you have any tell me about it!

I was a bit sick for a day or two last week-the weather is changing and I’d forgotten how easy it can be to catch a flu when that happens. It’s getting colder-which for some reason makes feel tired more quickly and get headaches more often. But nothing that can’t be handled!