Skip to content
Every night at 10 I go for a jog in my colony. I know, it’s a funny time to be out trying to lose calories, but thats the only time during my wake hours that there aren’t any vociferous and nimble kids running around or the sunlight trying to reduce my already reduced stamina or cars returning from their long day at their owner’s office’s parking lot henceforth giving me an excuse to stop as I wait for them to pass.
I do however encounter some human presence when I’m out jogging. There are the dog walkers, there are the elders taking their after dinner stroll, AND there are the GUARDS. 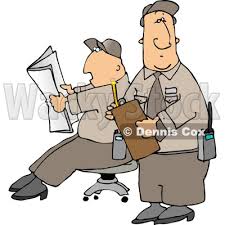 This is the critical time for a guard’s job. It’s the time during which the criminals are most likely to strike, with ambitions that the guards hope to crush. But when I pass the guard who sits at the back gate as he merely talks to another nocturnal friend on his phone, I can’t help but wonder, if a potential robber or some other criminal upto no good crosses his path, what are the chances that the guard will be able to do something about it?
First of all, no criminal in the history of crime, ever crosses any human being who is likely to cost them their night of glory with a knife and gun in their hand and with a naughty look on his face. My point is that no thief can ever be caught unless he is found picking the lock of the door he’s trying to open. And chances are that he’ll put all his hope and energy into making sure that doesn’t happen.
The god damnned thief could be someone casually walking in through the gates of the colony, just like the people who live there.
Second of all, even if a thief is caught trying to climb over the protective walls, the skinny guards are not equipped sufficiently to be able to fight them. I’m not trying to be cynical, but chances are that the sticks that they carry around with them won’t do much. Those sticks look more like something they carry around to have a psychological affect on any sinister who tries their luck. My guess is that those sticks are capable of being snapped into pieces if they were ever mistaken for sugarcane.
Alerting the other guards by blowing the whistles which uncertainly hang from their necks seem to be their only hope. But even then, for thieves who are well equipped ( and by that I mean anything from a knife to a rifle ), another two or three bamboo sticks wouldn’t really matter.