You must have read an endless number of articles about how to loose weight, and you must have seen those eye-catching advertisements in the newspapers of a fitness centre with a picture of woman before and after she lost weight due to their invaluable and unredeemable guidance(which btw, they provide for only Rs 1200 a month!).
Well I didn’t need any of that. Losing weight wasn’t my problem. I was good at dieting. No, I was GREAT at dieting. My biggest achievement was when my dadi, who happens to be among those Indians who can feed anyone who comes our way gave up on me.
I changed 3 school uniforms in 2 months. Stores which earlier I couldn’t go to because I was too fat, I still couldn’t go to because I was too thin.
My problem began when I started giving advice on dieting.
Now when people saw that I lost 10 kgs in 6 months, they came up to ask me how I did it? It felt so good to be the one answering the questions and not asking them.
I felt like a dietician, and I thought to myself. Maybe, I can just become a dietician without having to study about it. I can be the first empirical dietician in the world!
So the customers came pouring in and I got down to work!
My first customers were my parents. The first thing I did was throw out all the chocolates and sweets from our refrigerator. Then I replaced butter with low calorie butter, cheese with slimz cheese, and coke with diet coke. No chips were allowed in the house except special diet ones. I even threw out all the Bourbons and chocolate cookies and replaced them with Tiger and Parle-G instead! We checked their weight every week. I assured them that they would lose weight soon. But their weight started going up instead.

For a few weeks I wondered, how this could be happening. My dieting methods were fool proof, parent proof, adult proof, everything. But the day I smelt a McDonalds burger on my mom, I realized it was I who wasn’t fool proof! My mom and dad had been eating in office. My sources revealed that they had everything from rasgullas to ice creams to pizzas while they were in office and had decided to act all saintly at home. And their excuse,  “We thought we could eat in office. You didn’t say anything about eating there!”
Mom, Dad, really? Isn’t that just like me bunking all my classes at school and saying “What!! You do push me to study when I’m home. But you never said anything about school”
Needless to say, I had disowned my parents as my customers. They had greatly hurt my inner soul, by making me doubt myself and my dieting principles. It was time to move on.
My next customer was my friend. Now my friend was one of those huge people who you use as a pillow on road trips, those people who seem to be exercising and dieting all the time but never seem to lose an ounce, and if they do, you start doubting the weighing machine.  Lets just say that I wouldn’t be surprised if she told me that she was a long lost relative of the Dursley’s. (The Harry Potter fans know what I’m talking about)
I personally got very excited at the idea of instructing this friend of mine. I trusted those dear dieting principles of mine so much that I knew she would lose weight. I was so confident about them that I was convinced that I could turn an elephant into a flamingo.
So I told her, don’t eat carbohydrate, or fat. That meant no butter, no biscuits and definitely no cheese. 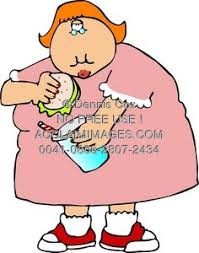 She was a very obedient pupil, unlike my parents I must say. And a very enthusiastic one too, which unfortunately did not let things end as I would have wanted them to.
Not only did she start following my diet, but she also started exercising on top of that. Now if there is one thing you should know about my diet, it is that it involves absolutely NO exercise.
My friend started going to the gym. The gym makes you hungry enough to eat more than shrek if not shrek himself. And if you decide to follow my diet on top of it, you’re a goner.
After 2 weeks of following my diet and her exercise regime, my friend ended up bed ridden, with instructions from the doctor telling her not to get any form of exercise for at least 10 months.
What’s more, the medication she was on made her gain even more weight. So by the time she was out of bed and able to walk and talk, she was even fatter than before.

Now, I was really distressed. First my parents, then my friend. Could there be anything wrong with my dieting ways? NOO! How dare I think of that!
My fears turned into reality when I myself started feeling weak and faint all the time.
This was when I realized that I was wrong. I realized that my dieting had not done me much good. Apart from reducing the flesh between my skin and bones, it had also reduced my bones to twigs. I was weak and tired and lazy and unhealthy. Sure I had lost weight, but maybe it was something not worth compromising with my health. It took me a while to realize this, and even more time to admit that I had been wrong all along.  But when I did, it came out to be a truly wonderful learning experience. From that day on, any friend who came up to me for dieting advice got a long sermon on the catastrophic effect of dieting.
So remember, the next time that creamy cake appears in front of you while you’re busy running away from it, think of whether you’re doing the right thing before you’re long gone and away!
Advertisement